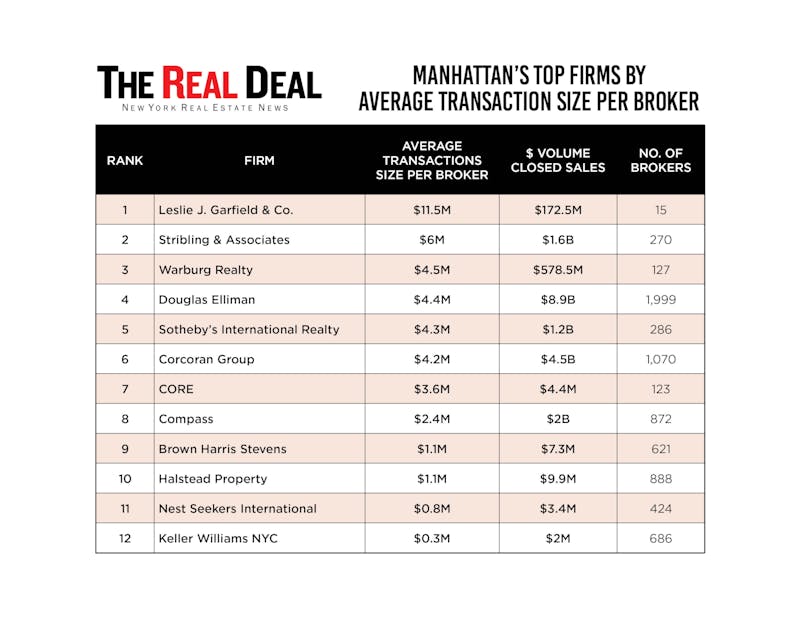 As The Real Deal recently reported, 2018 saw record reshuffling across New York’s leading brokerages. Although rumors of poaching and fierce competition have driven some of the movement, a number of agents are jumping ship to seek the best financial opportunities in a soft market.

We looked at The Real Deal’s year-end transaction data to see which firms are giving agents the highest earning potential based on the number of listings per agent, and the average transaction price per agent.

We compiled this view of the data to not only give agents a clearer idea of the real financial opportunities at a firm after the dust settles on lucrative signing bonuses and other enticements, but to provide some context for how firm size affects individual opportunity. The above chart tells a more complete story about an agent’s earning potential than the firm's total transaction volume alone.

These numbers exclude Brooklyn, where our average listings per agent total $23.6 million. Our median listing price per townhouse, at $4.95 million, is nearly five times the last-recorded median at the city's largest firm.

Notably, firms with some of the biggest agent losses of 2018 outperformed those with the biggest gains. CORE, which lost 25% of its agents according to The Real Deal, outranked Compass, which grew by 80%.

Having routinely made The Real Deal’s top 10 overall brokerage list by transaction volume with fewer than 20 agents, we’ve taken a different approach to growth than many other New York City firms, but it’s one that has allowed us to consistently provide agents the city’s highest earning potential.